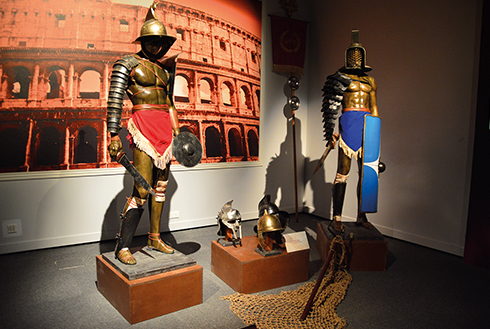 DAL 23/09/2015 AL 23/06/2015 The exhibition “ANCIENT ROME AND MARMILLA War and Construction Machines“ is produced by NICCOLAI SNC and is sponsored and organized by the Fondazione Barumini Sistema Cultura and the Municipality of Barumini and patronized by the GAL Marmilla. The scientific-educational exhibition, intends to outline the historical-cultural of Marmilla during the Roman age, and at the same time , offer an interactive approach to the exposure of machinery used by the Romans for civil and military use. Consisting of over 40 models – representing the ancient armor, clothing, and above all the war and construction machines and used by the Romans – it tells the story of the the mechanical evolution and the physical principles that govern its operation. The strong passion for history and engineering, the techniques developed in the laboratory of Niccolai’s family, the interpretation and study of books left by great men , such as “De Architectura” by Vitruvius – Roman architect and engineer of the first century BC - allowed the reconstruction of the scale models, carefully made ​​with materials of wood, iron, cloth, cordage, bronze. The processing of the original drawings, through the use of modern graphics software, has led to the reproduction of virtual models and the subsequent realization of machines really functioning, which allow the user to experiment directly the mechanism, creating a multi-sensory contact with the works exposed. The event is part of the cultural initiatives by which Barumini Sistema Cultura Foundation aimed to support the development of different artistic, scientific and traditional disciplines and to the experimentation of new issues, addressed to the development of thculture and the territory. The exhibition, inaugurated on the 12th April 2014 will be open until Juin 2015, every day from 10.00 to 19.00 at the Center for Communication and Promotion of Cultural Heritage “Giovanni Lilliu”, in Viale Su Nuraxi, in Barumini.
Questo sito web utilizza i cookie per migliorare la vostra esperienza. Accetta Leggi tutto
Privacy & Cookies Policy