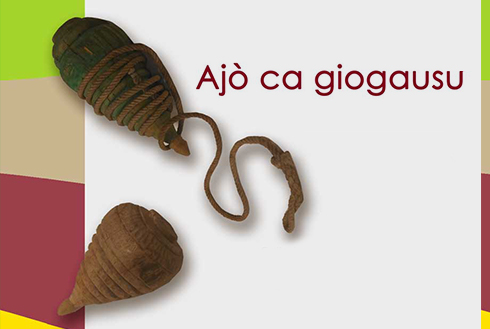 DAL 18/12/2015 AL 31/01/2016 From the 18th December 2015 to the 31st January 2016 at the Centre for Communication and Promotion of Cultural Heritage “Giovanni Lilliu”, in Viale Su Nuraxi at Barumini, you can visit “AJO CA GIOGAUSU” the Exhibition of Sardinian folk games and toys , organized by the Barumini Sistema Cultura Foundation and the City of Barumini. An exhibition dedicated precisely to the folk games and toys of Sardinia, is aimed at adults, as an occasion to remember their own childhood, recovering their memories, but also at young people, as an opportunity to rediscover the past, from which receive new incentives and where, curiously, find new alternatives to the contemporary daily game. A particular way to value the traditions of our communities, mostly of peasant and pastoral origins, able to create a deep bond with the territory. Everything told through the works of vivid and interesting Sardinian realities, which, at different levels and from different points of view, are engaged in protection and promotion of the rich cultural heritage represented by Folk Games and Toys of Sardinia From December 18th 2015 to January 31st 2016 will therefore be on display: The Museum of Sardinian Folks Toys at Zeppara (Ales), with a collection of wonderful objects that aims to spread the game culture in the agro-pastoral world through the display of toys from the past, “homemade” and constructed strictly from material found in the surrounding environment. A beautiful reality, managed by the Consorzio Cooperative Sardinia and Nature, which is a unicum in Sardinia, one of the few toy museums in Italy in terms of richness of materials collected, their scientific organisation andoriginal exposure. Giorgio and Antonello Puddu, artists and wood carvers, with a collection of works that are part of the traveling exhibition about Sardinian folk toys Gioghendi Gioghendi …, presented in Cagliari at the Royal Palace in 2012. A show through which rediscover folk toys, perhaps forgotten by most, as part of the life of each of us, that however is returned with a new freshness and vitality. Artists do not recreate the toy only only as a means of entertainment but give it several meanings getting to make it a true expression of art. Gianni Mattu, artist and painter out of the ordinary, with the collection devoted “to the games from the past” for which does not use the classic canvas but raw jute, blades of dried fig, sand, cement, scraps of cloth and jeans. Simple and carefree games, well described by the works of this extraordinary artist, who succeeds to bring together past and present in a beautiful play of colors and materials and so tying the thrilling memories of times gone to his lively and ever-changing art. The Morra game, one of the most characteristic and representative of Sardinian people, through the performances of Sos Murradores and the images produced by the Cultural Association “Sociu po su giocu de sa murra Roberto Mulas” who has been working for the protection and promotion of the Morra game and since 1998 has organized international championships and tournaments dedicated to this ancient game.
Questo sito web utilizza i cookie per migliorare la vostra esperienza. Accetta Leggi tutto
Privacy & Cookies Policy